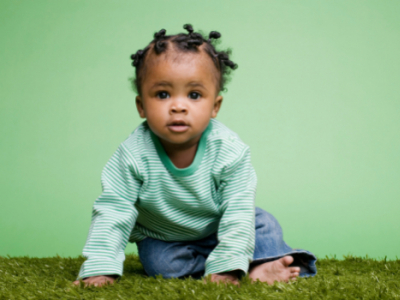 At what age does baby sit?

Sitting alone represents a remarkable feat for babies, a step towards their future autonomy. Having managed to hold his head alone, he now tackles his body support.

At what age does the baby sit ?

We are indicating a mark and not a prescription!

As for many stages there is no standard age, it is the respect of the order of the stages that counts and not the date on which such and such progress is made. “Sitting really doesn't happen until after all fours.” This is the final step before the walk that makes him “totally free and independent”.

More often than not, babies manage to sit up on their own between 6 and 8 months, as soon as the muscles in their neck and back have are strong enough to keep their head and torso straight, or at least roughly straight. Indeed, the first attempts were not clear successes: the baby totters and tilts rather quickly on the stomach, the back or the side ... Do not hesitate to prop it up with pillows or cushions to prevent it from falling. injures himself during his first attempts, but do not prolong this position too long (no more than a few minutes). By the age of 8 months, most babies manage to sit without support!

Step one : sit on the knees of the parent

When baby grows and reaches the age of 3-4 months, parents tend to introduce him to the sitting position by laying him on their knees. Leaning against you, baby is thus comfortably seated and gradually discovers the world around him by opening his eyes wide. Be aware that this position is not the most beneficial for him, his bones are not strong enough for this practice.

On average, from 6 months baby can start to sit up spontaneously by positioning his whole upper body forward. These are the beginnings of learning. He is not yet able to maintain his torso and thus puts both hands on the ground to support his body. This is an important step for a baby proud and happy to achieve new feats.

Little by little, your baby succeeds in raising his upper body by leaning on one hand, to finally keep himself straight without any support . Very quickly he will learn to maintain his balance without help. Hands free, he is now able to grab toys and other items around him. This phase occurs on average between 7 and 8 months.

Too often parents get babies into a sitting position before they can even do it themselves. But instead of making them "save time", it slows them down in their motor development.

We often think we are doing the right thing when we put a child in a sitting position. This is the common practice of the majority of families and some professionals not yet informed.

There are many arguments used to put the child in a seated position. It would be out of fear that he would be bored, to get him used to it and help him grow, because we have always done and seen it done like that, because that way he has both hands free to play, because that he can see his surroundings better.

It is also reassurance about its development, it is to see it grow and approach the vertical, it is to respond to the doctor's question "is he sitting down? "Is to have fun, it is also wanting to please him.

It is sometimes because he cries while lying down, or even because we see him raise his head as if he wanted to sit. In fact, it is then a "non-physiological" movement that gives tension and bad posture throughout his musculature. The physiology of our joints and muscles is designed for rotational movements around the axis of our spine. So when adults, we have back pain , we remember that the right movement is to turn the head and the body to come and sit down.

What if baby is late in sitting?

It may very well happen that a baby 8 months or older has still not been "tempted" by sitting. This is quite common in premature babies, who need more time to develop, and even in full term babies. This does not hide anything worrying in the vast majority of cases: each child evolves at his own pace. Don't try to force him to sit down: it won't help. He must try on his own when he feels ready. However, as a precaution, if you see that around 11-12 months your baby is still not sitting up, talk to your pediatrician.