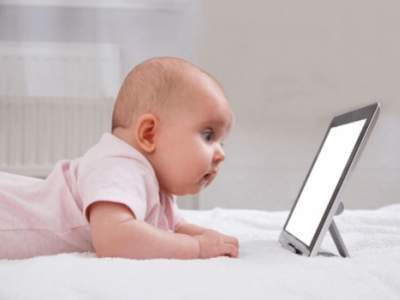 Baby watching TV, is it serious?

Baby watching TV: is it serious?

Have you noticed how your baby seems attracted to the images projected by the television as soon as it is switched on? Is this hypnotic power of the small screen good or bad for its development? If, like one in two children before 18 months, your baby watches TV, precautions are necessary. Explanations.

My baby watches television: a fact of society?

Today, screens have literally invaded our daily lives and it is difficult for a toddler not to let his gaze be caught by these colorful light sources offering perpetual motion. In stores, waiting rooms, transport and of course at home, they are everywhere. An Inserm study reveals that if two-year-olds are more exposed to TV than to other supports (tablets, game consoles, etc.), two out of three watch it every day. Before 18 months, half of the babies watch TV every day.

This phenomenon is relatively recent. It is said to be around ten years old. The proliferation of channels dedicated to toddlers and the marketing around them probably has something to do with it. Also, more and more, parents are tempted to orient the baby's deckchair so that their infant watches TV. The television becomes a life companion, while parents can tackle their obligations without fear of being interrupted. Not really trivial, this gesture can even harm the health of children.

The impact of television and screens on baby's development

Your baby is watching TV and wondering if it is good for his health to let him do it? The answer is final: no. The screen exerts a powerful power of attraction in the little one. In front of the television, his eyes are wide open and his expressionless face. His eye is drawn to the movements of the characters in the images. As hypnotized, he does not move and sometimes even keeps his mouth open. However, while your baby watches TV, he does not engage in the activities necessary for his good development and cuts himself off from all essential stimuli between 6 and 18 months. Indeed, to grow well, he must explore his environment, touch objects, bring them to his mouth and interact with his parents and with everything he sees.

The danger of screens has a name: early and excessive exposure to screens (EPEÉ). It is a new neurodevelopmental disorder whose consequence is to alter the behavior of children. It causes a delay in communication from 2 - 3 years, sleep disturbances, concentration, food and restlessness. In short, a sword of Damocles over the heads of the youngest.

So, at what age can a baby watch TV?

The authorities' recommendations are vague, hence the excesses observed. The CSA and certain specialists recommend to avoid exposure to the television before 3 years. But neither the Academy of Medicine nor the French Pediatric Society set an age below which a baby should not watch TV. So, in the absence of official recommendations, common sense must prevail. The TV news and all images that can traumatize the little ones are to be banned at all costs. The time spent in front of the channels dedicated to children must be supervised by the parents and limited.

Do you want to know what is the best TV program for your child? It's you ! By watching you evolve and busying yourself with your activities, he simply develops his cognitive capacities.