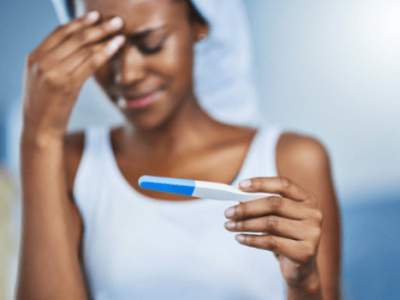 They have all the symptoms of pregnancy: late periods, nausea, stomach aches ... But the test invariably remains negative. In these women, we speak of nervous pregnancy. Focus on this far from trivial phenomenon.

Unlike denial of pregnancy where the woman is not aware of her condition, sometimes until term, a woman suffering from nervous pregnancy is convinced of being pregnant even if she is given proof to the contrary. She then developed many symptoms:

Nervous pregnancy: who is affected?

A nervous pregnancy is both a desire and a fear of being pregnant. If each story is personal, people who tend to have excessive fears are more vulnerable. This phenomenon can be found in some young women who have a strong desire for a child or, on the contrary, a phobic fear of pregnancy. Sometimes these two causes are intertwined. The woman longs for a baby but at the same time the pregnancy terrifies her. She dreads every step. The nervous pregnancy is a way for her to confront her fears. She is experiencing pregnancy, but without the baby.

Pervious pregnancy also affects more mature women. Decreased fertility and the road to menopause are all difficult stages to go through. Some mothers dread this passage. Pregnancy is then a way to awaken femininity. They feel the need to give birth one last time, to continue the filiation with a youngest child. Only, they are afraid to start over, they no longer feel capable.

The psychological work of mourning maternity or the inability to pass this stage can trigger the symptoms of pregnancy.

What are the treatments for a nervous pregnancy?

Pervasive pregnancy is in most cases the result of a fear of being pregnant, or a strong desire to have a child. In both cases, psychological support is required. This mental disorder requires a multidisciplinary approach involving doctors, gynecologists and psychiatrists. You have to understand the origin of the disorder by asking the woman about her story.

One of the difficulties faced by physicians is the patient's belief that she is pregnant, although medical imaging tests confirm this. opposite. During her treatment, the doctor will teach her to refocus on her body, on her sensations and to overcome her fears.

Once awareness takes place, pregnancy symptoms then regulate themselves naturally.