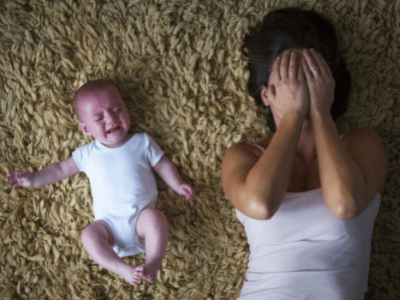 What is post-partum depression?

About 15% to 20% of new parents, postpartum depression isa disordermore common than one can think first. this type of depression nextthe birth of a babyshows varying cases, depending on the symptoms shown and their intensity. still unknown to the general public, this evil is not without consequence onthe psychological balance of parents and the development of the child. post-partum depression requires a better understanding and care earlier to avoid the long-term installation of the depression.a complete point on this disorder can be done, highlighting the precise definition of post-natal depression, its symptoms, causes and treatments.

the definition of post-partum depression

Post-partum depression is adepressive disorderwhich can manifest after delivery. this phenomenon, also called"post-natal depression", touches mainly mothers, but also fathers in some cases. it occurs at different times during the first year of the baby. this type of depression is worse thanthe baby bluesand must be taken care of with appropriate care.

Close to a new in five mother is affected by postpartum depression. studies have shown that7% experience significant symptomsdepression within three months of delivery, and19% of mild to moderate symptoms.It is common to confuse a depressive state with fatigue related to the arrival of the baby during the first few weeks. the most difficult period is within three to six months of birth. during this phase, depressions are the most numerous(41 per cent of affected persons). after the first six months, depressive disorders gradually decrease.

The symptoms of this disorder

Post-partum depression is characterized by a series of symptoms that can identify this disorder inyoung parents.it is common that people do not realize themselves of their depressive state and do not dare to speak with their relatives to express their difficulties. for this reason, it is important thatsurrounding is attentive to symptomswhich reveal a depressive disorder following delivery.

The most common are a deep sadness without precise reason, recurring and unexplained weeping as well as a state of permanent exhaustion, going hand in hand with a disturbed sleep (nights too short or too long). Mothers often experiencea feeling of devalorization or high guilt by raising their child in the first few weeks.They may feel like they are not up to the height or feel difficulties in establishing a true connection with their newborn. Other symptoms are to be known, such as exacerbated irritability, extreme anxiety, especially regarding the baby,an inability to care for the infant,even a refusal to spend time in his company.

Post-partum depression canhaving consequencesdeeper on the personality and behaviour of new parents, such as appetite disorders, overall disinterest, isolation from others and in the most serious cases of suicidal ideas.

Depression after delivery is caused by a set of factors that are difficult to determine. it can bephysiological causes, like lack of sleep or exhaustion, but also difficulties caused by the enormousdaily changes with the arrival of the baby.the constraints generated can give an insurmountable impression of task for a parent. Often, the contrast between the immense expectations of a child’s coming and a more complex reality is difficult to bear. a feeling of disappointment can happen, which will gradually lead to the depressive state.

Studies have been able to identify severalrisk factorsfor post-natal depression. people who have suffered anxiety or depression before or during pregnancy are the most susceptible to this disorder. among other known factors, recent stressful events, some social isolation, less self-esteem, weakened couple, difficult breastfeeding and family history are to be mentioned.

These depressive disorders must be treated as long as the symptoms mentioned above are highlighted. without care, this condition can reduce the ability to take care of the baby and harm the development of a bond of attachment to the child. he could then present a cognitive and emotional retardation, with sleep disorders and emotional difficulties including.

A parent in postnatal depression needs to be accompanied and receive all the help he needs. It is important that the spouse do not minimize the suffering of the mother, be present to listen to her without judging her and strengthen her presence in the child’s daily life.

Approximately20% of women suffer from symptoms or post-traumatic stress disordersafter a difficult delivery. it can result in a lessened relationship to the child and a blockage to handle it properly. The help of a professional is then to be recommended to overcome this paralysing feeling.

Psychotherapy can be useful,and the use of antidepressants for a given period of time. Parent-child units are specially designed to reconnect the relationship between a mother and her child. to be accompanied immediately,the parent line (1 800 361-5085)is a free and accessible service at any time.

You can also read the following articles in order to live your maternity.